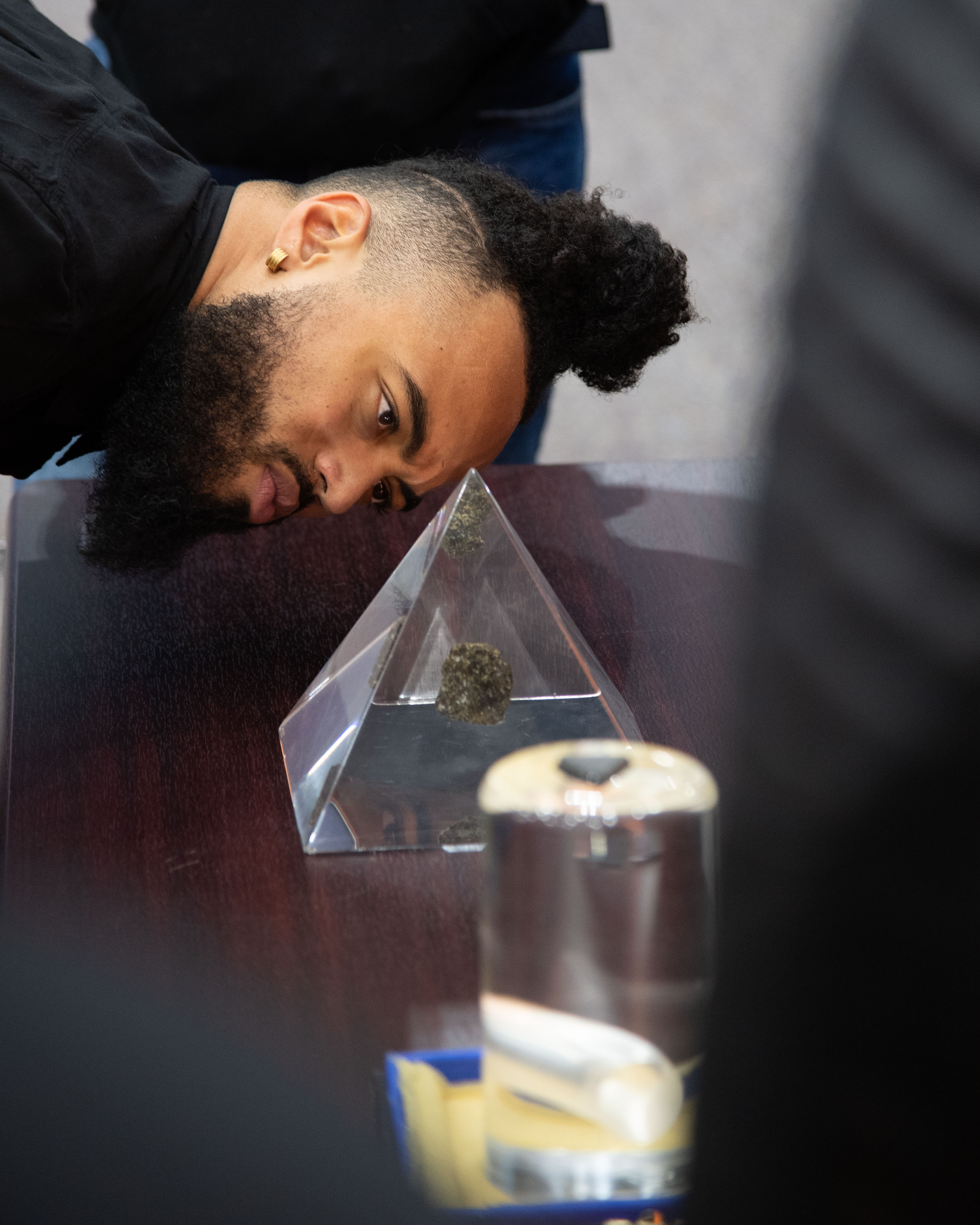 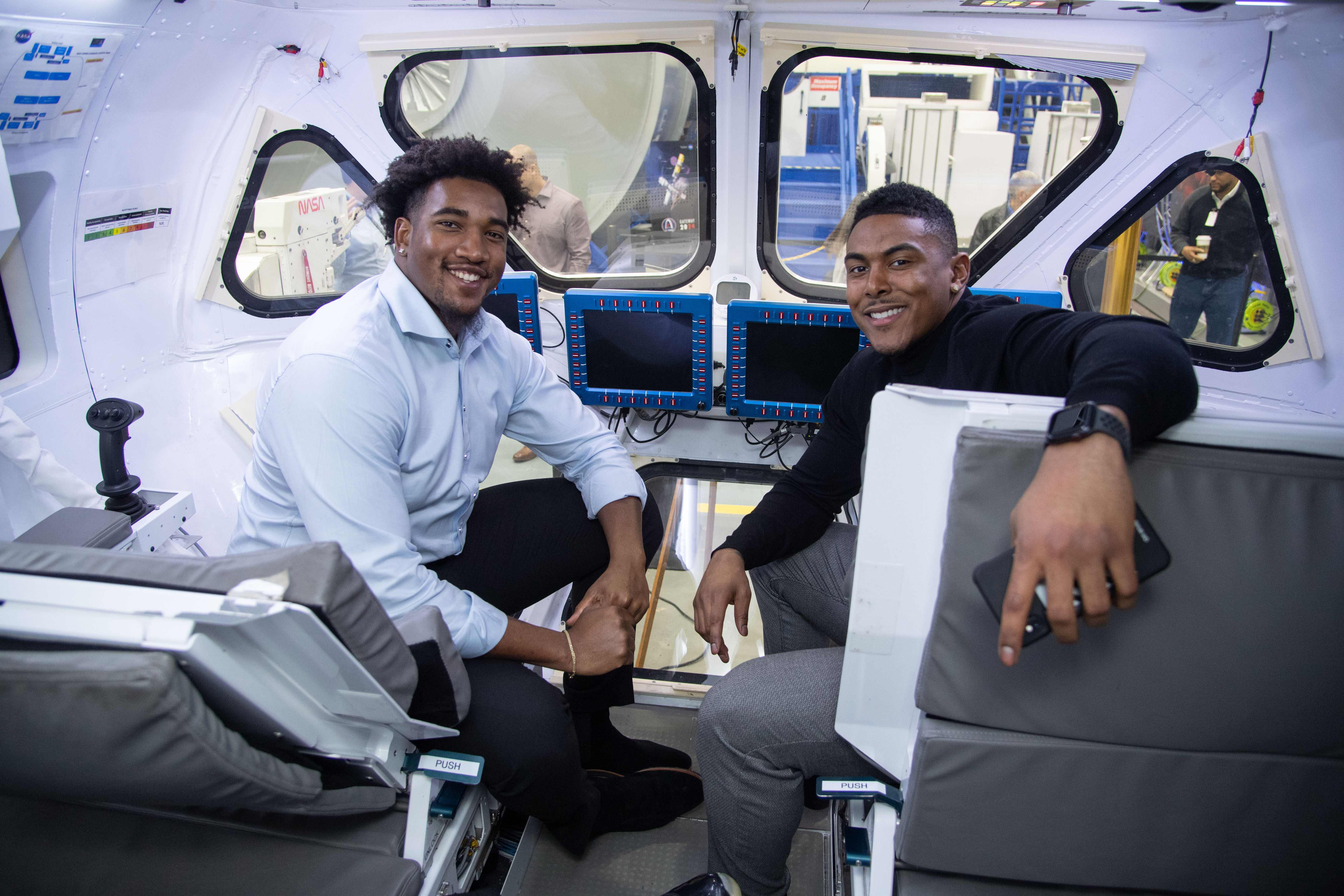 Eric Smith and Chris Peace try out the astronaut life from the driver seat at Johnson Space Center. 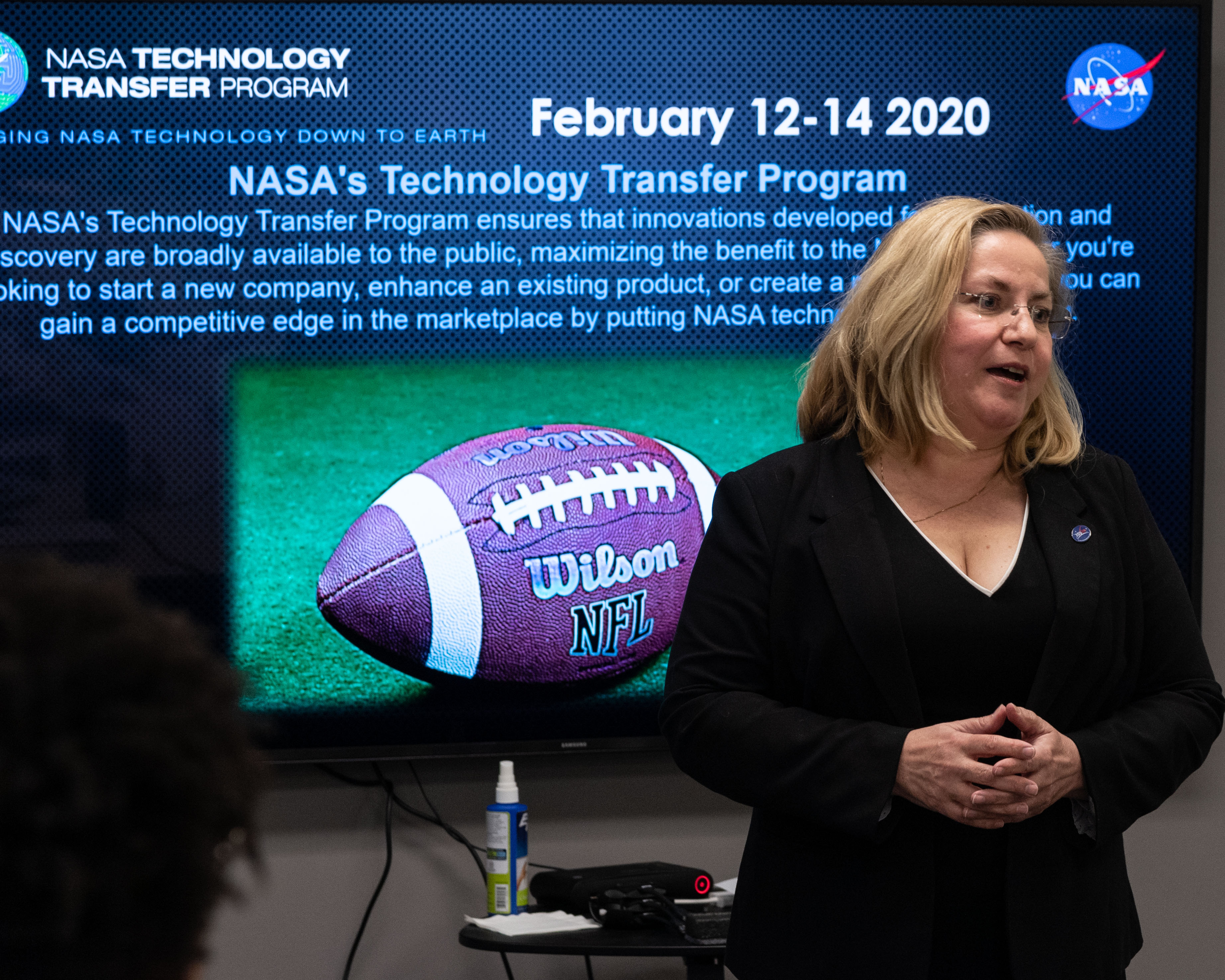 In the 1960s, two famous American establishments were hitting their stride. The first Super Bowl took place in 1967, and two years later, NASA landed men on the Moon. Now, more than five decades later, American football and the space agency are coming together in the name of technology transfer.

“NASA has a lot to offer entrepreneurs interested in utilizing our technologies, and events like this help to connect people interested in working together,” said Dennis Small, program manager of the NASA Commercialization Training Camp.

NASA research parallels terrestrial needs in industry, medicine and safety. NASA’s Technology Transfer program ensures that technologies developed for missions in exploration and discovery are broadly available to the public, maximizing the benefit to the nation. With an extensive patent portfolio and software catalog, NASA has hundreds of technologies available for licensing by the private sector.

Professional athletes often launch second careers as entrepreneurs after retiring from sports. NASA has engaged with this unique group of motivated individuals because, due to their access to resources and connections made in the league, they have a high chance of overcoming the “valley of death,” a common term in the startup world that refers to the difficulty in covering negative cash flow when beginning a company. Part of the NFL Players Association’s mission involves helping members explore new career paths in the aftermath of their athletic pursuits.

The training camp in February brought together 10 athletes and a collection of NASA technology transfer professionals, members of the Texas startup community, entrepreneurs and others adjacent to the commercialization and business realm.

“We’ve had a number of our player members express interest in technology and entrepreneurship,” NFLPA Player Manager Connor Ford said. “That’s why we are excited to collaborate with NASA on this great opportunity while helping these athletes dig deeper into their interests beyond sports.”

On the first day, attendees met with Joseph Holmes, CEO and founder of Acuity Edge, an invention valuation and marketing consulting firm. Holmes shared his perspective on technology commercialization and business plans.

The next day, Super Bowl champion and entrepreneur Obafemi Ayanbadejo spoke to the group about his experience licensing a NASA technology for his startup, HealthReel. Ayanbadejo’s mobile application pairs a licensed NASA algorithm with other technologies to help users efficiently track progress toward their fitness and health goals.

The second day also featured a discussion with Ayanbadejo, Gary Baxter and Joseph Wesley, former NFL players who retired from football, started their own businesses and are in the process of licensing NASA technology. They shared their stories of transition from professional athletes to entrepreneurs.

“The NFL Players Association has done a great job helping players reach their goals and dreams beyond the playing field,” said William Sweet, a current player for the Arizona Cardinals. “I didn’t realize how many resources NASA had available for entrepreneurs on its tech transfer portal.”

Throughout the three days, attendees heard from members of NASA’s Technology Transfer Program, including Commercialization Services Lead Kris Romig and Technology Manager Eric McGill. Romig shared his experiences as both an entrepreneur, engineer and technology transfer professional, and McGill talked about programs such as I-Corps and FedTech that can help entrepreneurs evaluate government and university technologies for commercialization.

On the final day, attendees engaged in a panel discussion with Texas-based business professionals – Jon Nordby of MassChallenge Texas, Remington Tonar of The Cannon Houston and Brad Rossacci of Accenture’s Houston Innovation Hub – and learned the basics of launching and scaling a startup business.

“Over the course of this workshop, I’ve taken more than 20 pages of notes,” said Eric Smith, an offensive lineman for the New York Giants. “I’ve learned how to narrow down my ideas and conceptualize them with a business map. I know it’s been beneficial to my personal growth as well as the professional path I choose to take in the future.”

The athletes also enjoyed a surprise visit from Jennifer Fogarty, chief scientist of the Human Research Program at Johnson. She shared some of NASA’s work on human physical performance and health, a topic that resonated with the audience.

Attendees left the training camp with new insights about NASA technology and how it can help them create new products and services to address unmet needs in various markets that interest them. Additionally, players received a list of NASA technologies that they can consider for licensing. NASA technology transfer managers will follow up with the athletes in the next several weeks and months to discuss next steps.

“To me it was much more than an externship – it was a networking opportunity, and I’m planning to take full advantage of it,” Smith said.